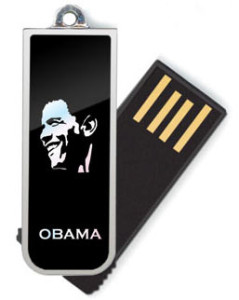 If you’re looking for something techie to go with all your other Barack Obama junk, then the Barack Obama USB Drive is what your wallet has been calling for. The 2GB flash drive comes with Obama’s inaugural speech on MP3, his ‘Race Speech’ (we really don’t know why the put that on there’ and the official Barack Obama White House photo.

The Barack Obama USB Drive also has his handsome mug etched into the side as a holographic image so you will never get it confused with all the other 2GB flash drive with useless junk on them. Available for $10 if you want it (and why wouldn’t you?).
source