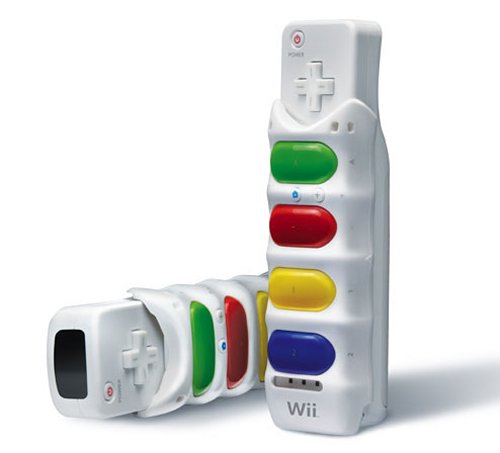 The new Nintendo Wii game, Popstar Guitar, is the Wii’s own version of the Rock band and Guitar Hero franchises that have been such a phenomenal success (unlike Wii Music

^^). Popstar Guitar comes with yet another funky Wii pheriperal, the AirG.

Wii being Wii had to do things slightly different and the Popstar Guitar AirG eschews the usual toy guitar accessory in favour of a ‘case’ for you to slip in your Wii remote to turn it into a guitar simulator. The AirG Guitar features four (colorful) fret buttons rather than the traditional guitar shaped imitations you usualy get with music games.

The Wii AirG (apart from looking a bit cheap to be honest), fits handily into your palm allowing you to strum along to Popstar Guitar like the rock legend you know you are.

Popstar Guitar will retail for about $60 and will include tow AirG Wii Guitars when it goes on sale in the coming months.