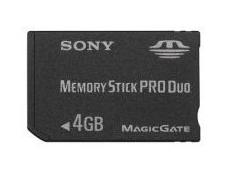 We’re going to be comparing the main brands of 4gb Memory Stick Duo, SONY and SANDISK.

As per usual SONY can do great things when they want ot but always leave the customers wanting more. The Sony 4GB Pro Duo Memory Stick

is excellent for the PSP and cameras but, pay attention here, it is NOT suitable for any current brand of SONY Ericsson mobile phone. It’s too big lol. You can pretty much use all the advertised 4gb capacity and it’s read write ability is what puts it above the generic 4gb Memory Stick Duo’s out there.

We give the Sony 4GB Pro Duo Memory Stick

is another story. It comes with a 5 year warrenty which is a slap in the face of many of the cheap fakes that have flooded the market. The SanDisk Memory Stick PRO Duo has a gaming version which packs a bigger punch and has a faster read / write capabilities for your PSP etc. However, the standard 4GB memory stick is a fair competitor to the SONY version. It has the same (or similar) built in MagicGate technology and a sturdy build.

We give the SanDisk 4GB Memory Stick PRO Duo

Are Mini HDTV’s Worth it??