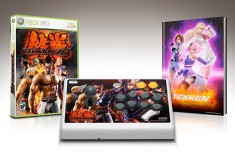 we saw a while back with one major difference – it’s wireless (hence the name, probably). The custom Tekken 6 paint jobby looks pretty slick and about $50 cheaper than the wired SFIV version.

There are two versions of the Hori made Wireless Tekken 6 joystick, one for Xbox 360 aficionados and a PS3 version. Both have the same artwork and both come with a Tekken 6 artbook (sweet) and the game for a reasonable $150.

The game is due to be released in the coming months but seeing how crazy (and we do mean nuts) people went over the SFIV Fightstick, we would get those pre-orders of the Wireless Tekken 6 joysticks