It’s hardly been a secret the Nintendo were intending on revising the Wiimote and at E3, they finally let the cat completely out of the bag with the unveiling of the Wii MotionPlus – The next gen Wii remote. The Wii MotionPlus will be shipped with Wii Sports Resort when it is released an promises to take motion control to the next level.
.
Imagine finger tip control (or wrist control ^^) that actually recognises every subtle movement you made, that’s the bold claim of the Wii MotionPlus. GadgetHeat wonders if this doesn’t take the wind out of the sail of the ‘Darwin’, xBox 360’s answer to the Wiimote

.
.
Nintendo claim that the Wii MotionPlus brings 1:1 sensing to the Wii (whatever that means) allowing you to have even greater control over Wii games like Wii Sports Resort. E3 looks as tasty as ever and with gadgets like this, GadgetHeat is busy looking for a press pass… 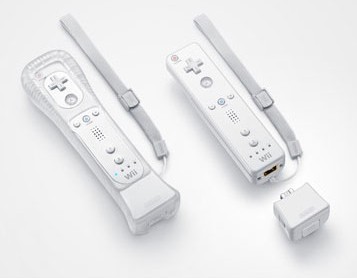