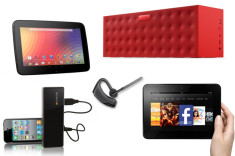 When something breaks or gets lost, it makes sense to replace it – even if that gadget is on the expensive side. However, the decision to upgrade a gadget like a game console or a smartphone simply because the latest version is out can prove to be quite a dilemma. Does one spend the extra money on the upgrade? What if the newer version isn’t really so much better?

Upgrading gadgets for the New Year doesn’t have to be such an issue. The thing to remember is to keep an open mind and consider the upgrade carefully before just jumping in. Furthermore, it is worth remembering that meaningful technological changes occur every few years, so if the old version was just released a few months ago, the newer model may not be so impressive.

For a quick and easy guide, take a look at some of these everyday devices and make an informed decision about upgrading.

Today, people use smartphones for everything from listening to music to checking email to playing games. However, if one uses the phone as it is intended – simply as a phone and to check email – then an upgrade every few years is probably sufficient. For those who use smartphones for every little thing, an annual upgrade may be well worth the expense. Just remember, changing carriers just for that cool new phone may add significantly to the cost.

Relatively new on the gadget front, tablets are strange creatures. Sure, they are great for watching movies and reading books, but they haven’t quite replaced the laptop and certainly aren’t used as a telephone. Tablets might actually be one of the items that folks don’t need to upgrade so frequently, as they have stayed pretty much the same since the first iPad. The only exception is the iPad Mini, which is just a smaller version of the iPad. Until manufacturers make huge strides in tablet development, it may be worth it to hang on to the version in hand.

Justifying the cost of replacing a laptop or computer every few years is pretty easy, as computers do improve in that time. However, all computers are built on mature technologies, which means that a standard computer will likely serve the average user very well for a long time. Additionally, instead of upgrading the entire computer, why not consider upgrading the components instead? Updating a hard drive, adding memory and making other minor improvements can cost significantly less than buying a whole new computer and may make the machine almost as good as new!

Finding the money to upgrade

However, if one still needs cash for Nintendo DS

or wants the latest iPhone, there are ways to do so without breaking the bank. An obvious solution is to sell an old gadget and put the money toward the purchase of the new one. Finding a friend to fork out the cash is one easy way to sell an old gadget, but it might limit profit. Also consider online sales through eBay or Craigslist.

If selling the item isn’t an option, it’s good to know that many stores offer an in-store trade-in program, which allows for old devices to be recycled or refurbished while crediting the consumer with funds towards an upgrade. There are also mail-in recycling services that often pay for gadgets, though most simply allow consumers to recycle their old technology for free and provide no payment.

Going Virtual – What Does it Mean?

Where to Use Plenum Cables