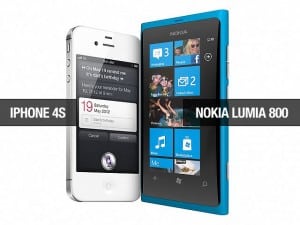 The Nokia Lumia 800 marks the first device released after the announcement in February of a partnership between Nokia and Microsoft. The Finnish manufacturer’s first Windows Phone device, there is great expectation that the Lumia might help Windows Phones gain ground they may have lost to Apple and Android. This Christmas, top of the wishlist for many will be Apple’s new device, the iPhone 4S. Does the cheaper price of Lumia 800 contracts

have what it takes to knock the iPhone off the top spot?

Both are slim devices. The Nokia Lumia has a 3.7 inch display with an AMOLED screen and ClearBlack display, designed to reduce reflection. Produced using the same technology as Nokia’s popular N9, the new device has the same polycarbonate casing that feels both ergo-dynamic as well as rigid and secure. The iPhone 4S is also sold on the basis of being a slim, sleek and stylish phone. Its screen is a little smaller than the Lumia at 3.5 inches but both are striking devices.

The Lumia 800 is powered by a 1.4 GHz processor. It has only 16GB of internal user memory but, utilising Microsoft’s SkyDrive cloud service there is 25GB extra free space. This makes it a powerful device, yet the iPhone would largely edge it out with its A5 chip and dual-core processor. On light usage, both last around a day. Complaints over the iPhone 4S battery life are likely to be ironed out in the next iOS5 update.

In terms of camera, Apple states the iPhone 4S’ camera is so good, you won’t believe it’s on an smartphone. Both measure up at 8 megapixels. Nokia has a proven track record in delivering excellent smartphone cameras. The N8’swas marketed as having the best smartphone camera in the world. The Lumia 800 uses Carl Zeiss optics. The delivery is sharp images that are crisp and make it easy to pick up rich colours and a variety of textures. It will be up to taste as to preference between the iPhone 4S and the Lumia 800, but the lack of a front-facing camera on the Nokia might put some off.

In terms of operating systems, all eyes will be on the Mango architecture on the Lumia 800. The first Windows Phone by Nokia there is great expectation of how well it will work. The look on initial use, the live tiles that show different applications laid out in coloured blocks on the opening screen does look very different from Android and Apple. Receiving email from any account, better integrations with social networking sites like twitter and Facebook show a desire to bring the Windows Phone more in line with other smartphone OS. The Apps available in the Windows Phone Marketplace show a desire to gain ground on Apple and Android. Many developers have favoured their competitors. An improved OS with better integration between Apps suggests while it may look different, Windows Phone is working to behave in a more iOS manner.

for the iPhone 4S is a matter of some debate. Its price bracket at around $399 SIM-free puts it in the same as the latest Android and Apple devices. Nokia’s name has always been in building solid, sleek and stylish devices. It is not the only smartphone to be launching with a new operating system, the Samsung Galaxy Nexus utilising Android’s new Ice Cream Sandwich will turn heads. But the fact that, for the first time, Nokia can be seriously discussed in contention with the leading smartphones on the market shows they have made considerable headway with the Lumia 800.

New developments in under the hood technology

The Samsung Galaxy S is to get ICS features