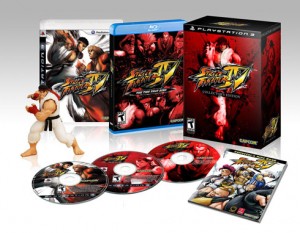 With the game release just around the corner, we’ve clapped eyes on the new Street Fighter IV Collectors Edition Packaging. We must be excited about this game to be talking about the packaging but, by all accounts, this is the Street Fighter we’ve been waiting for and it comes with a kick-ass animé too.

Included in the collectors edition is the animé movie – The Ties That Bind, detailing the events post Street Fighter 2 to Street Fighter 4. Available on Blu-Ray for PS3 owners (great) and on a ‘special game disc’ (WTF is that?) for xbox 360 owners, the animé is 64 minutes of HD quality brutal action.

The collectors edition also has some ‘secret’ downloadable content (read costumes) only available to those who fork out the $79.99 purchase price (and probably a day later for those with Rapidshare accounts). Also included with the Street Fighter IV Collectors Edition is a figure of either C.Viper or Ryu (PS3 owners get Ryu, xBox 360 fans get the other one).