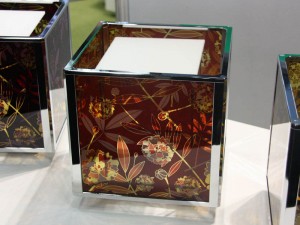 In the spirit of making everything as eco-friendly, SONY has revealed their new line of solar charging lamps, the Hana-Akari Lamp. Artfully designed in four distinctive Japanese styles, each Sony Hana-Akari lamp comprises of four individual solar panels joined to form the lamp and turn light into energy.

Slated for a 2009 release, SONY has announced that they have ‘big plans’ for the technology (what, like the mini-disc?). With the ability to dye the panels with various colors and designs, solar panels no longer have to look like concrete slates, making whatever they are attached to fugly.

In today’s struggling worldwide economy, viable (and pretty) ways to save energy like the Sony Hana-Akari lamp, look like a good market to be in. No word on price as yet but we suspect that the prettier the pattern, the more it’s going to cost….