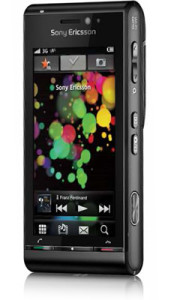 The previously secret Sony Ericsson Idou was unleashed on the world a day before the World Mobile Congress starts.

With scant information, we’re reserving judgment on the Sony Ericsson Idou, for now.

The Idou (allegedly just a code name), packs in 12-megapixels of camera goodness along with xenon flash. Most surprising is that the Sony Ericsson Idou ships with a Symbian OS, previously the domain of Nokia. With a large, 3.5 inch touch screen, viewing your pics and other supported media (and it should support a lot) on the handset should be a pleasure.

No further details as yet other than that Sony Ericsson Idou will be released in the 2nd quarter of 2009.