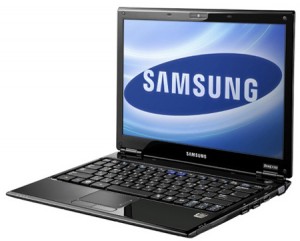 If you’re into the netbook game (and why wouldn’t you be, eh?) the Samsung NC20 netbook looks set to rock your world. Well, maybe slightly move your wallet. The NC20 Netbook comes hot-footing on the the heels of Samsung’s recently revealed NC10 with a few minor tweaks making this an upgrade you may have wanted to consider if it wasn’t for the price….

The Samsung NC20 Netbook comes in at an astounding (for a netbook) $642. As netbooks go, you may want to consider the MSI Wind U120 Netbook

which has slightly better specs for a more moderate price. You would have thought that Samsung noticed the shrinking global economy and if they don’t get it we’ll spell it out – People are broke, yo.