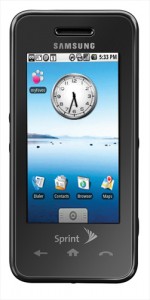 Android is picking up the pace after a slow start with the G1. Samsung looks set to enter the fray by the middle of next year with their own Android handset, thought to be based on the successful Omnia.

After the lukewarm reception (compared to say, the iPhone) of the T-Mobile G1, Sprint has seen the gap in the market for a killer Android handset to take the software to the desired level of must-have hysteria so have teamed up with T-Mobile to commission one from Samsung. Thought to have a team of 80 developers working on the gadget, Samsung have announced that they are ‘accelerating the development process for Google phone in order to meet the specific need of local carriers’.

Look out for the Sprint Samsung Android Phone around June next year stateside. The base model should be that of the Samsung Omnia meaning a full touch screen with few buttons. No word on price as yet. Keep watching, Android is on the move….