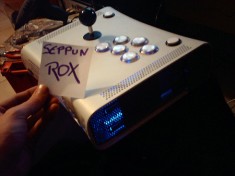 The RRoD Xbox Arcade Stick looks pretty cool but there’s one thing nagging us. These days, the xbox 360 Red Ring of Death isn’t the the end of the road critical problem it used to be. Why modder Seppon decided to turn his screwed-up xbox 360 into an arcade stick

rather than get it repaired is anyone’s guess. Maybe he didn’t have warranty or Microsoft refused to repair it for him?

In any case what we have here is an ingenious use of the xbox 360 chassis which has been gutted to remove the original 360 internal workings and replaced with arcade stick functions. The only way we would have given it extra cool points if the RRoD Xbox Arcade Stick had been modded to play itself, i.e., you could play games on it and also use it as an arcade stick to play those games. Now that would have made the RRoD Xbox Arcade Stick outstanding.
source