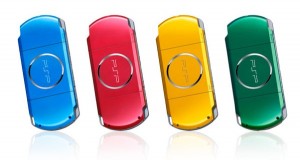 After a sucky financial year, SONY are trying to squeeze every last bit of juice after a few of their more successful products and the release of the PSP 3000 in Carnival Colors is a classic example of their ‘flog it to death policy’.

Looking like Colorware have got their hands on it, the four versions of the PSP 3000 carnival are veritable bundle of glow in the dark fun. Splashed with either Blue, Red, Yellow or Green on both the inside and outside, apart from the near blinding colors, there isn’t much more to say about these spin-offs. Strictly for fanboys and high-school kids only we say.

If you’re looking for a bargain, you can get a special edition PSP

3000 in Carnival Colors with included 4GB memory stick and 2200mAh battery. We’re waiting for the day-glow PS3 to be released, then we may be interested (just maybe mind).
source

Yet Another MacBook Mini Design Concept