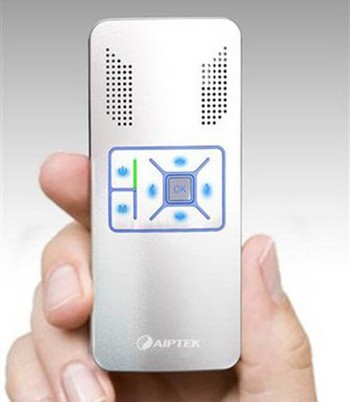 We hate fiddling with projectors at GadgetHeat

meetings as it’s bad enough having to carry the bulky things around all day never mind setting them up. This little gadget we’ve found looks set to save our day.

Aiptek have released their pocket-sized projector, the Aiptek PocketCinema V10. The Aiptek V10 is capable of projecting a 50 inch screen and has a 3-in-1 AV jack as well as support for AVI and MPEG-4 video formats. As the title of the projector suggests (PocketCinema), Aiptek made it pretty darn small.

.
Apart from working as a projector, other functions of the PocketCinema V10 include 1GB of internal memory as well as a multi-card reader function for reading SD, MMC and MS Pro cards.

Make sure you have a good look at a few offers as price is yet to be confirmed but the track records of Aiptek suggests that it wont be burning a hole in your pocket so if you’ve had enough of bulky projectors, the PocketCinema V10 could be what you’ve been waiting for.

Music To My Eyes – MP3 Shades