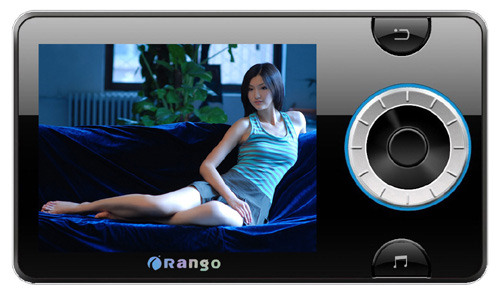 At $51, the price of the Orango V880 portable media player would seem to be the best thing going for it but you would be wrong.

You would also have thought that most PMP manufacturers would have thrown in the towel to Apple by now, especially with the release of their new Nano

The Orango V880 portable media player comes with a 2.4″ screen that looks pretty flawless, its USB port is 2.0 USB compatible and the V880 has expandable memory via a microSD card slot. As with many PMP’s these days, it pays homage to the iPod by having a click wheel (even it does try to differentiate itself by glowing blue).

The V880 supports MP3, AVI (Divx / Xvid) and, as is becoming more common these days, ebooks.

Style wise the design of the Orango V880 portable media player is rather slick and at the price (albeit 2GB) it may make a handy gift for someone who just wants a media player rather than a fashion statement (i.e. Apple fanboi’s).