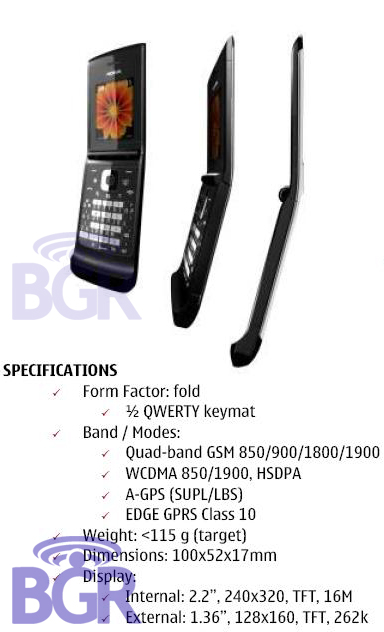 The new Nokia Wahoo 3G QWERTY Flip Phone reminds us of the Motorola Razr which we don’t like so we hope the comparison ends with its looks (which we do like). Rumoured to be heading for At&T, the Wahoo only gets half a cheer from us.

Nokia’s interestingly named ‘Wahoo‘ features all the usual gadgetry expected from a modern cell phone including Bluetooth 2.0, up to 4GB micoSD memory, half-QWERTY keypad (why only half?) and is a Quad-Band cell phone so worldwide availability is expected.

We can’t say that we are too impressed with the feature list to be honest (which includes a shoddy 2Mega-Pixel camera and no mention of GPS). GadgetHeat

gets the feeling that the Nokia Wahoo 3G QWERTY Flip Phone is designed to wean the Motrola Razr fanboys in their direction.

We’ll see what happens when the Nokia Wahoo 3G QWERTY Flip Phone is released come the new year….In the meantime, we’ll be waiting for WiMax to be trundled out so that we can get our hands on the new HTC Max 4G

Bang & Olufsen BeoSound 5 – Back With A Bang