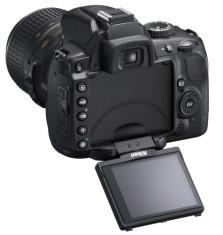 After much leaks, hype and PR, the Nikon D5000 DSLR camera is finally here and the best thing? All the leaks were actually spot on. This is a quality HD DSLR with a swivel screen (ooh) for just (and we say ‘just’ in relation to the usually extortionate prices for this kind of DSLR) $850.

The Nikon D5000 DSLR breaks down thus: 12.3 megapixels, 2.7? swivel LCD, 720p video at 24fps, Stills at 4fps, EXPEED image processor and 3D Color Matrix Metering II, Built-in dust control systems, an abundance of scene modes, lighting effects and all the other fiddles and tweaks that none but the most picky should attempt to use.

When we say HD, we are talking about 720p and not 1080p like some of the other HD DSLR cameras

we have come across lately but what do you expect when the Nikon D5000 DSLR is coming in at sub $1000? The swivel screen is probably more useful for paparazzi types who are on a budget for holding the camera high above their heads (or low to the ground for those all important celebrity upskirt shots). 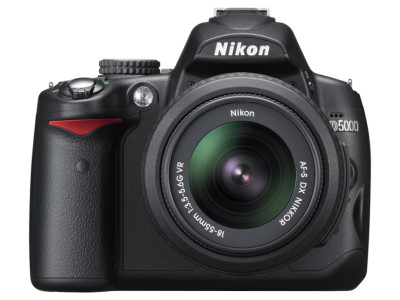 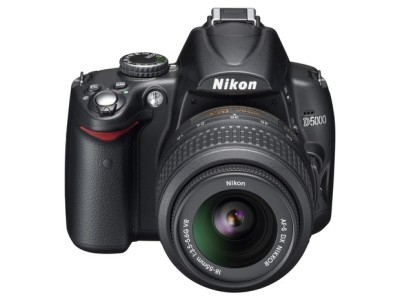 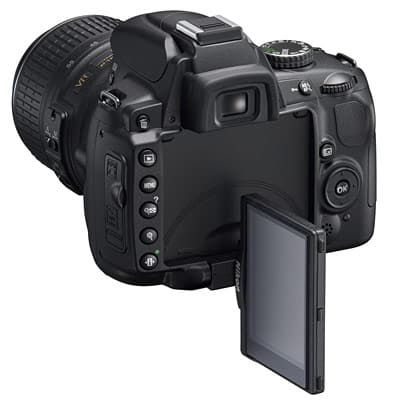 Whether consumers are progressing from a point-and-shoot digital camera or looking to upgrade their current digital SLR and elevate their photographic expression, the D5000 serves as an ideal solution. First time D-SLR photographers will appreciate logical and easy-to-use controls, while creative enthusiasts will appreciate the D5000’s robust combination of features, technologies and performance. The D5000 boasts a versatile 2.7-inch Vari-angle LCD monitor that encourages shooting with a fresh perspective, Nikon’s revolutionary D-Movie Mode and expanded automatic Scene Modes, delivering superior Nikon innovation in a compact, user-friendly design.

“The Nikon D5000 represents a cornerstone in Nikon’s D-SLR line, marrying simplicity and instructive features with superior technology and HD video, allowing the user’s ability and creativity to grow-with the camera,” said Edward Fasano, General Manager for marketing, SLR System Products at Nikon Inc. “While its easy-to-use design will attract first-time D-SLR photographers, the D5000’s rich feature set and high performance will also appeal immediately to more experienced enthusiasts. The D5000 is sure to inspire creativity and originality.”

Broadened Creativity and Adaptability
Photographers can easily compose stunning images on the Vari-angle LCD monitor that they can view in a normal position fitting securely within the camera back, or swung out to be rotated or tilted. The monitor can also be stowed with the LCD panel tucked against the camera back to protect the screen when not in use. This tremendous freedom of movement, along with four Live View autofocus shooting modes, affords users the opportunity to shoot from a multitude of imaginative angles. Easy one-button Live View activation now features Subject Tracking autofocus (AF), which automatically locks onto a moving subject. Even if the subject leaves the frame and returns, Subject Tracking AF maintains focus, making the D5000 ideal for capturing fast moving children and pets. In addition to Subject Tracking AF in Live View, the D5000 features Face Priority AF, which automatically detects up to five faces in a scene and focuses on the closest subject; Wide Area AF, which offers a large AF area for optimal hand-held shooting; and Normal Area AF, which provides pinpoint accuracy when shooting with a tripod.

The D5000’s D-Movie Mode allows users the exciting ability to record HD movie clips (1280 x 720) at a cinematic 24 frames per second with sound. Photographers will appreciate the quality produced whether creating vacation clips or intertwining still photographs and movies in a post-production creative montage. Additionally, the D5000 is compatible with a comprehensive assortment of AF-S NIKKOR interchangeable lenses to provide users with the ability to capture perspectives not possible with typical consumer video recording devices. When using any NIKKOR VR lens, D-Movie clips benefit from Nikon VR image stabilization, which automatically activates during recording to deliver added sharpness and image stability. VR image stabilization also extends the D5000’s performance in low-light situations. D-Movie clips are recorded onto an inserted SD or SDHC memory card and saved as Motion JPEG AVI files for easy editing with widely available video editing software.

Further bridging the gap between point-and-shoot cameras and more advanced D-SLRs are the D5000’s 19 automatic Scene Modes, which free users to capture beautiful images without having to manually adjust camera settings. With the broad range of automatic Scene Modes, including Sports, Portrait, Candlelight, Silhouette, Autumn Colors and more, D5000 is the perfect camera for anyone looking to make inspiring images in challenging photographic conditions.

The D5000 also incorporates a comprehensive set of in-camera editing features to make the most of captured images without the need of a computer. The D5000 also introduces several new Retouch features, including a Soft Filter effect, which applies a smooth appearance to faces or the entire image; Perspective Control, which helps correct distortions in perspective often encountered in photographs of architecture; and Color Outline, which creates monochrome outlines of objects in images by eliminating color and tonal gradations. The D5000 saves each of these edited images as a separate JPEG file, ensuring the original image is left unmodified. With Nikon’s exclusive Picture Control Settings, photographers can quickly select various image appearance profiles that include Standard, Neutral, Vivid, Monochrome, Portrait and Landscape settings. In addition, Picture Control provides the ability to create and store up to nine user-defined custom profiles to reflect each user’s personal preferences for hue, color saturation and image sharpening.

Extensive playback options allow users to review their photos in groups of four, nine, or 72 thumbnail images. Alternatively, users can select the Calendar View to easily group and select images by date. These playback features can be viewed either on the Vari-angle LCD or an HDTV with HDMI connectivity available via a dedicated HDMI port on the camera.

Proven Image Excellence
Consumers will immediately appreciate the benefits of the D5000’s 12.3-megapixel CMOS sensor coupled with Nikon’s exclusive EXPEED™ image processing system, which delivers highly detailed images with vibrant color reproduction and low noise across a broad ISO range. The D5000’s normal ISO range extends from ISO 200 to 3200, allowing for superior shooting in low-light conditions. Additionally, the D5000’s ISO range can be expanded to a Lo 1 setting of ISO 100 or a Hi 1 setting of ISO 6400, furthering the opportunities for previously impossible shots.

Nikon’s exclusive 3D Color Matrix Metering II, in conjunction with the EXPEED image processing system, contributes to the D5000’s ability to capture breathtaking images by instantly evaluating the exposure elements of each scene and comparing it to an onboard database of information from more than 30,000 images. These split-second calculations allow the D5000 to ensure the right exposure-even when conditions are extreme. To push creative boundaries even further, the D5000 allows picture-takers to also use Center-Weighted and Spot metering for added personal control.
Smooth, Swift and Quiet Operation

Paired with Nikon’s AF-S NIKKOR 18-55mm f/3.5-5.6G VR image stabilization lens and the ability to shoot at four frames per second, the D5000 easily captures moments other cameras miss. Nikon’s VR image stabilization lenses reduce the blurring in images due to camera shake, allowing photographers to shoot hand-held at as many as three full stops slower than would otherwise be possible.*
The new D5000 also features the innovative Integrated Dust Reduction System, which offers both an electronic sensor cleaning when the camera is powered on and/or off and the Airflow Control System, which directs dust away from the sensor with every snap of the shutter. These functions work to clear image-degrading dust from the sensor’s optical low-pass filter, helping to ensure spot-free images. In addition, the D5000 features a Quiet Release Mode that reduces the mirror cycling noise for discreet shooting in sensitive situations, such as weddings and other ceremonies.

System Expandability
Photographers and enthusiasts alike can also appreciate the D5000’s system expandability, as the camera can work in conjunction with a variety of Nikon accessories including a broad assortment of NIKKOR AF-S interchangeable lenses. While the D5000 offers a versatile built-in flash, the camera is also compatible with Nikon’s Creative Lighting System and capable of Advanced Wireless Lighting when using the SB-900 Speedlight or the SU-800 Wireless Commander. For those looking to document their photo excursions with geo-tagging, the D5000 is compatible with the optional GP-1 GPS Unit, which automatically records latitude, longitude, altitude and time information when a picture is taken.

Price and Availability
The D5000 outfit, which includes the AF-S NIKKOR 18-55mm f/3.5-5.6G VR lens, will be available at Nikon Authorized dealers beginning in late April 2009 at an estimated selling price of $849.95**. For consumers who want to configure their D5000 system or for photographers who need an additional D-SLR body for an existing system, the D5000 will also be offered as a body only for an estimated selling price of $729.95. For more information, please visit www.nikonusa.com.