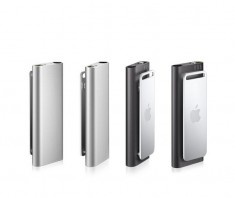 Apple has rather quietly (for Apple) release their new iPod Shuffle 4GB. The main difference is the moving of the volume buttons to the headphones so that it now has in-line controls.

The new iPod Shuffle 4GB shape has also been slimmed down somewhat to resemble a fat packet of chewing gum which is great if you like diddy things but annoying if you have the fingers of a fat oaf (ahem). The main specs break down as follows:

• 4GB (up to 1,000 songs)
• Comes in silver or black with a stainless steel clip
• Controls have been moved to the earbud line
• “Voice Over” Text to speech artist and track names
• 10 hours of battery life

The new iPod Shuffle 4GB will set you back $79 so grab it if you have the fingers of an elf.