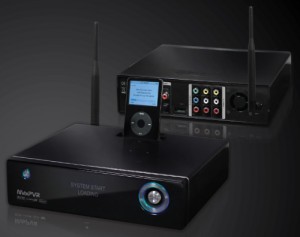 The Mvix MvixPVR Streaming Media Player / iPod Dock is a gadget with a difference. Whenever a gadget has a ‘slash’ in it’s title alarm bells start ringing at GadgetHeat

telling us to stay away as this usually signifies a confused gadget, best left alone until it decides what it wants to be. Not so the Mvix MvixPVR which looks like it could be pretty good at all the the things it wants to be, which is a fair few…

Getting the simple stuff out of the way first, the Mvix MvixPVR is capable of acting as a standard iPod dock. Allowing you to house your iPod and play videos and tunes via its 5.1 digital surround sound.

On the streaming and video storage side, the Mvix MvixPVR can pump out video in HD, 720p and 1080p via HDMI. You have to attach your own HDD but there is talk in the air that the next version of the MvixPVR will have an inbuilt HDD.

BitTorrent is supported as is WiFI and a whole host of other connectivity options making sure that you should always be able to connect to something and, if all else fails, you can use the USB port to hook yourself up.

No word on pricing as yet but expect the Mvix MvixPVR to hit the shelves in Q1 of 2009.

Toasty Charger – Battery On Toast – by Hyun- A Ko