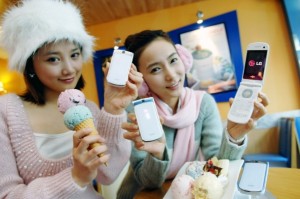 Making gadgets for a niche market is a risky business. Get it right and you’re onto a cash-cow. Get it wrong and the rest of the market scoff at you for making such a piece of cack. Enter the LG-LU1600 – Ice Cream Phone 2, designed for Japanese schoolgirls everywhere – see where we’re going with this…?

Granted, Japanese schoolgirls and their wannabe’s (yes, there are girls who wannabe Japanese schoolgirls) are a fairly large and lucrative market but the LG-LU1600 – Ice Cream Phone 2 has nothing more complicated to offer other than being a clamshell design that flashes pretty colors when it rings. It’s just a missing feature away from being a toy.

Apart from the pretty colors (including snow white, sky blue and peach pink) features that are ever so slightly more respectable include EVDO Revision A mobile broadband and, er, that’s it really. There is nothing the LG-LU1600 – Ice Cream Phone 2 offers to anyone else other than its target market. LG better hope they are over the Ice Cream Phone 1 then……

The LG-LU1600 – Ice Cream Phone 2 is available via LG Telecom now if you really want it and if you’re in a girly frame of mind, you can check othe Canon PowerShot E1

– another gadget for the ladies….