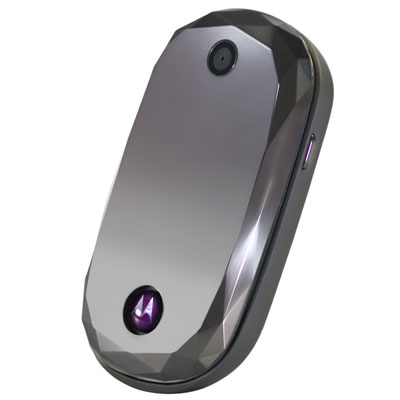 recently released and now the Motojewel, Motorola’s new mobile phone handset which is obviously aimed at the female market, us boys are feeling a bit left out (well, not really but we like to complain).

The Motorola Motojewel comes in a fetching chipped clamshell design with a translucent phone surface that allows you to see the screen underneath when required (much like the LG Shine). Exclusive to the Carphone Warehouse UK

, the Motojewel doesn’t just rely on its good looks, it also packs some rather decent technical specs.

Not only does it have a rather swift Linux-based operating system, but the Motorola Motojewel also packs touch sensitive keys, stereo Bluetooth for improved sound and a dedicated music player button access.

You may be wondering, where’s the girly side then? Well if you can live with oh-so-pretty design of the Motorola Motojewel, you may not be so enamoured with the carry-case it comes with containing a vanity mirror and space for make-up.

Still if they renamed it something like the ‘MotoRock’ for example, and stuck it in a snakeskin wallet, we wouldn’t say no…Video and pictures below.