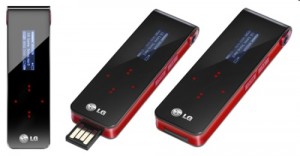 The LG UP3 Touch Digital Audio Player is one of the best looking and daintiest PMP’s we have seen for a while. Yes, yes, we’re so vain.

The UP3 DAP comes with a mini touch screen and a stylish red and black exterior. The touch sensitive LED controls come alive in a garish red light and the entire effect is rather fetching (hence, it ended up in GadgetHeat

For those of you for whom looks aren’t everything (in all other cases this would be women but when it comes to tech, we’re referring to men obviously ^^), under the shiny shiny exterior the LG UP3 Touch Digital Audio Player can play MP3, WMA, Ogg, has a built-FM radio tuner and recorder and even provides up to 15 hours of audio playback.