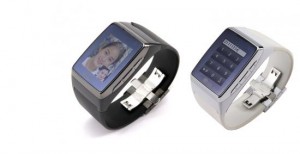 The LG-GD910 watch-phone is a gadget we approached with apprehension. LG are known for making some really good and, inexplicably, shockingly bad gadgets. Thankfully the LG-GD910 wristwatch phone falls into the category of the former – something that could be surprisingly good (although until we have seen it in the flesh, we’re hedging our bets).

Destined to be unveiled at CES 2009, the LG-GD910 Watch Phone features 3G (a first for a wristwatch phones), video calls and a 1.43 inch touchscreen. Given the size of the watch face, methinks that you are going to have to have pretty slim fingers in order to use it effectively.

The LG-GD910 Watch Phone also packs in built-in speech recognition voice dialling, TTS (Text To Speech), Bluetooth and a camera. All in all, it’s pretty jam-packed with features for such a min-gadget. We reckon that it will be a sure fire winner amongst the South-East Asia crowd although the LG-GD910 wristwatch will be hitting European shores first.

No pricing details have been revealed as yet.