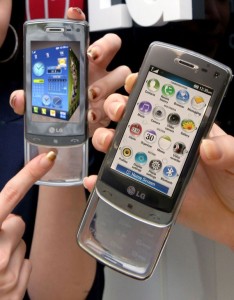 More news on the LG GD900 announced at this years Mobile World Congress. Looks like the keypad is made of glass rather than plastic as was initially though and the LG GD900 handset also comes with a fairly well evolved multi-touch version of LG’s S-Class UI.

The LG GD900 also features vibrational haptic feedback and the transparent keypad can also be used as a touch-sensitive (multi-touch) mouse pad when using the internet browser or navigating the S-Class UI. One cool feature is being able to make a ‘M’ gesture on the keypad to launch the MP3 player. You can also pinch to zoom in on photographs (does Apple know about this?).

A May release of the LG GD900 is pencilled in for Europe and Asia but no US release dates have been revealed as yet.
source