We have gathered all the relevant info on the new iPhone 3.0 operating system with a hands on coming shortly so you can have the full lo-down before you download it. In the meantime, we’ll just break down all the juicy bits about the new iPhone and iTouch 3.0 operating system and we have to say, it’s looking pretty tasty. All of you who have jail-broken your iPhones will probably have to wait a bit longer than the rest of us to get a jailbreak the iPhone 3.0.

App and developer functionality
Peer-to-peer connectivity over Bluetooth and wifi for gaming and other info-swapping.
Paid apps will have the potential to be subscription fee-based, and can include optional paid content that can be bought from right inside the app.
Developers can now build apps that call out to Google Maps, and can also finally bring Apple-blessed turn-by-turn to the phone.
Devs can also connect with hardware accessories over in their apps now, such as a blood pressure monitor — or perhaps a keyboard? Connectivity works through the dock connector or over Bluetooth.
Long-promised push functionality will at last be included, but apps won’t run in the background.
Developers can add streaming video and audio to their apps, along with in-game voice use.
General functionality
Cut, copy and paste. At last! You can shake the phone to undo and redo the action, and it works with both text and photos, allowing Mail to send multiple photos at a time.
MMS, along with forward and delete for multiple messages.
A2DP stereo Bluetooth.
Spotlight has been added to a new home screen page to the left of existing pages, allowing for universal search on the phone.
Tethering is built into 3.0, and Apple will work with carriers on that — who will have the last say on its implementation, most likely.
Apple apps
A new app called Voice Memos which lets you record notes and reminders.
A revised Stocks app, with news stories and a landscape view.
Landscape keyboard available in all major apps.
CalDAV support has been added to Calendar, along with subscriptions support in the .ics format.
Apple’s major apps have all been expanded with search functionality.
A developer beta of OS 3.0 is available today, and the 3.0 update will be coming to consumers this summer as a free update to all iPhone 3G customers. It’ll also work for 1st gen iPhone owners, though they won’t receive A2DP or MMS due to hardware limitations. iPod touch owners will be able to update for $9.95, just like last time. 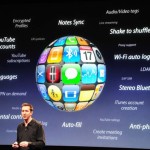 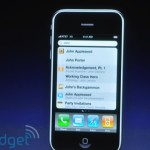 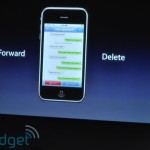 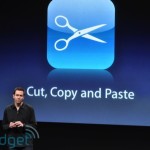 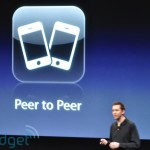