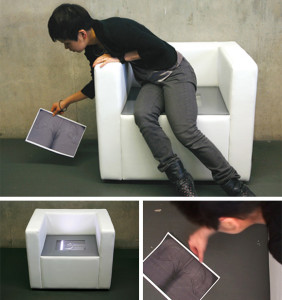 The iBum Chair can only be a useful piece of furniture if you are a clown, paparazzi or just plain perverted. Practical jokers can invite their unsuspecting victims (or celebrities with a penchant for not wearing underwear) to sit in the iBum Chair and a quick flash later (pun intended), the iBum Chair will have photocopied their backside and printed it convieniantly at the side of the chair ready for you have a good laugh at them (for about 5 seconds) or send it to the local celebrity gossip magazine (could be profitable).

The iBum Chair is designed by Japanese designer Tomomi Sayuda and seems to serve no purpose apart from to get a good look at people’s buttocks. No doubt it could be big in Japan if it ever leaves the concept art phase but as far as the whole genre of multi-media furniture

is concerned, it’s pretty limited. Video of the iBum Chair in ‘action’ below.