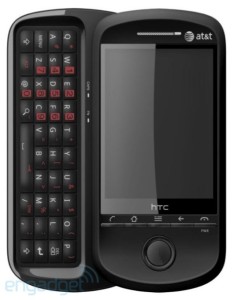 Welcome the HTC Lancaster, AT&T latest and greatest qwerty slider which also runs on an Android OS. Better late than never we guess….

, the stand out feature of the HTC Lancaster is its full QWERTY keyboard which slides out from under the frame. The handset comes with triband EDGE and 850 / 1900MHz HSPA, AGPS, 3-megapixel fixed-focus camera, Bluetooth 2.0, microSD expansion, and a the HTC social messaging user interface (whatever – just as long as we can get onto Facebook and twitter, it will do).

The HTC Lancaster will be for AT&T eyes only for at least 6 months when it is released come August 3rd. Take that data with a pinch of salt though as it looks liks AT&T want to pre-load a customised interface before the HTC Lancaster release meaning that we may not see it until deep into Q4. 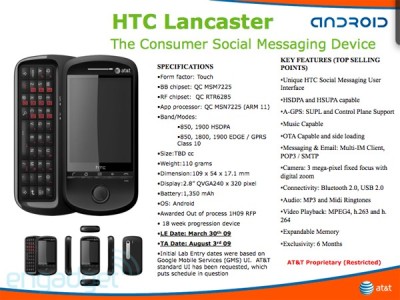