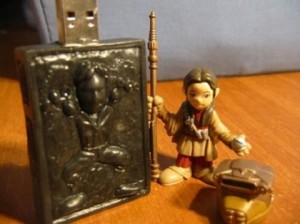 Han Solo has always been way cooler than Luke and this Han Solo Carbonite USB Drive has moved his coolness into hyperspace. This 1GB of USB storage comes courtesy of Etsy craftsman jasonscreations

and is currently sold out (although if you ask him really nice, he may just make you one).

At $25 it’s a bit pricey than what you would normally pay for 1GB of storage but coolness and customization comes at a price. Star Wars gadget fans can truly represent with their very own Han Solo Carbonite USB Drive, even if he does look somewhat frog-like in his frozen stance.

If jasonscreations was smart, he would crank out a few more of these, add Vader and Yoda USB Drives to the mix and he may have a real money spinner on his hands. The Star Wars cash cow just keeps on rolling.