and the Garmin Nuvi

having to get cleverer and cleverer in order to stand out from the pack. SONY has decided to compound their misery even further by releasing the GPS add-on for the PSP, and has now hinted that GPS games for the PSP may soon be on their way as well.
.
GadgetHeat has no idea how a GPS game would work but it does sound pretty cool and according to John Koller over at SONY, developers are thinking much more about how they can integrate GPS into their games for the PSP.
.
All you Final Fantasy and RTS fans will never get lost on those huge maps again once GPS is fully integrated into PSP games. The rest of us, who just want a cool GPS, will be happy with the add-on that allows us to turn our PSP into a fully functioning GPS that can play games. Sweet. 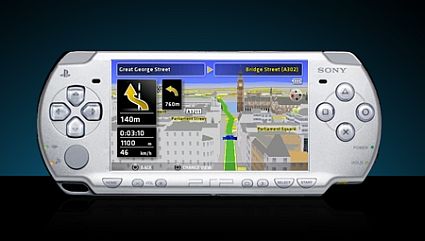