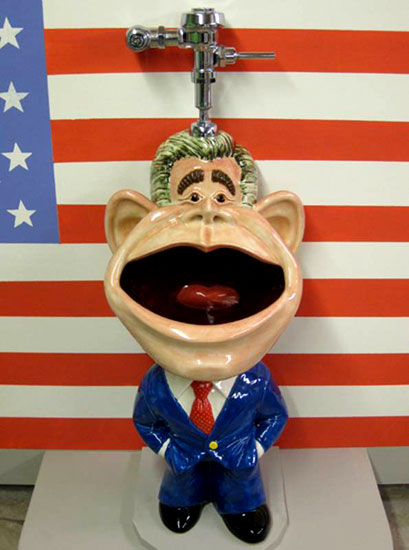 but we almost fell off our chair laughing when we copped a load of this one – the George Bush Presidential Urinal.

You may have read the title of this post and thought that we had some exclusive pictures of the White House presidential lavatory but no, this is ‘toilet humour’ at its best and offers voters sick and tired of the last eight years a chance to urinate in George Bush‘s mouth. Nice.

Designer Clark Sorensen will be displaying more artistic insights into George Bush and his tenure at his San Francisco show running between January 17th and February 19th entitled “Down The Drain – The Legacy of George W. Bush.”

The George Bush Presidential Urinal is pretty quirky but the question is, in eight years time, will he be making one of Obama or McCain?