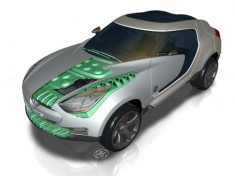 are filed following minor road traffic accidents every year in the US. And by minor, we mean those that occur at low speed and usually result in a rear-impact collision (a shunt to the back of your car).
However, breakthroughs are being made in the world of technology that could eliminate the risk of this kind of injury and the impact that whiplash and spinal injury claims

has on insurance premiums nationwide.

The Georgia Institute of Technology in Atlanta, Georgia, is one such institution that is researching the issue in an attempt to heighten the effect of in-car safety mechanisms to make them even safer than they are today.

Scientists and engineers are working on the incorporation of algorithms into in-car computer systems, which could work to eventually make rear-end collisions a thing of the past.
Put simply, these specially-formulated algorithms will alert the driver of the car that the car in front is going slower or slowing down.

The prevailing problem of low-speed collisions is caused by the fact that drivers are less able of calculating the correct speed of the car they’re trailing at speeds of under 8mph, so when the traffic has come to a near crawl and drivers are slowed to a near stop, this is when the risk of whiplash is at its greatest.

When the algorithms detect a slower speed of the car in front, mechanisms will kick in to override the driver and take over the controls from them (they’re therefore directly triggered by the in-car computer system’s algorithms).

When the algorithm takes over the controls from the driver, it will mimic the acceleration and braking patterns of the driver in front. It also has the ability to be programmed by the driver themselves, who may want to set up alerts as to, say, the speed and distance of the car ahead at all speeds, not just slow speeds.
This new technology holds so much promise that it’s now being tested by the likes of Mercedes Benz and other high-end vehicle manufacturers, and it is hoped that it will become a feature of most vehicles over time as the technology is tried, tested and proven to be highly beneficial.

However, if you don’t think you’re going to be one of the lucky Mercedes customers who will be treated to such high standards of in-car safety just yet, then there are other ways of improving your neck’s chances of escaping a slow-speed collision unscathed.

Wear a seatbelt at all times;
Always ensure that your head rests are where they should be and that they are neither too low or too high. The way to achieve the correct height for your headrest is to measure it against your ears. The top of the headrest should align with the top of your ears, while the correct distance from your head to prevent over-extending the neck on collision is two inches.

Keep Your PC Protected with the Latest Internet Security Programs

What are Online Data Centers?