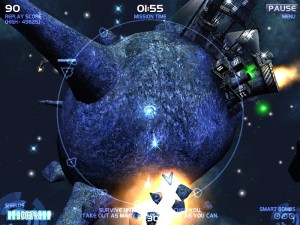 We love a shoot-em-up at GadgetHeat

and, in a nostalgic moment, I’ve been thinking about getting myself a good scrolling space blast-em-up for a while. DarkSide came to my rescue and it’s a blast from the past with a great modern day twist.

Think of your favourite scrolling space blaster from back in the day (Asteroids springs to mind), pimp it out to the max and you get ‘DarkSide – ArcLight 2’. It’s made by Pieyegames, an independent video games maker with a great reputation for making classic games (two of their games made the top 10 independent games of 2007

DarkSide is a SciFi 3D shoot-em-up that takes you through 100’s of varied levels of strategy and blast-em-up glory (yes I said hundreds!). The variation in the gameplay plus the gorgeous graphics is what makes this such a blast. Pilot your ship through the solar system as you battle the Krainian Empire in a fight to gain independence for your people. There are three game modes including full-on Arcade mode which really brings back the 80’s heyday of space blast-em ups but in an even bigger and brighter way. 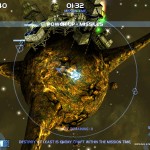 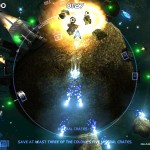 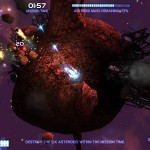 to see what we mean by freaking awesome!! by the way, the Smart Bomns will make you wet your pants…

How long Is A Piece Of String