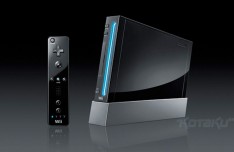 The Black Nintendo Wii. Remember the phrase ‘you can have any color as long as it’s black?’ Nintendo have finally got onboard with this sort of thinking and are planning to release a Black Nintendo Wii this August. The only color (apart from white) that is officially endorsed.