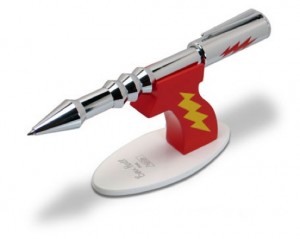 The Acme Ray Gun Pen must be what old Wile E. Coyote used to write all his letters of complaints to the Acme company with. Half their stuff, nay, all their stuff, never worked. That damned Road-Runner always got away.

Anyway, back to the Acme Ray Gun Pen, made by designer Ben Hall, the thunderbolt designer probably doesn’t make it go any faster but it does make it look a smidgen cooler which is all the justification we need to get it. Mounted on a ‘ray-gun‘ gun sight, the pen is shaped like the barrel of said gun when resting.

The only thing putting us off the Acme Ray Gun Pen is the $130 price tag. It’s cool and all but with it being made by Acme and their track record of screwing things up for Ol’ Wile E. Coyote, we would rather get a 99cent bic pen then fork our the readies for this. Besides, there are bigger guns

out there that caught our interest…