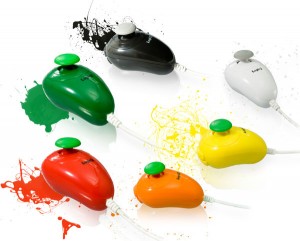 and manage to stand out from the crowd by being all the colors of the rainbow (literally).

Designed to be used with any Wii game tha requires nunchucks (we didn’t think there were that many), the Funchucks can be attached to your Wii remote and used to kick some colorful ass. At $20 a pop they are cheap enough to equip all your wiimotes with one but, like we said, how many Wii games require nunchucks (we really want to know).

Available now, the Logic3 Funchuck can be yours in Red, Orange, Yellow, Green, White or Black. If we were into Wii accessories, we’d stick with the Logitech Premiere Edition Wireless Guitar Hero controller

(we don’t care if the game doesn’t require a guitar shaped controller, we’re going to use it anyway).
source