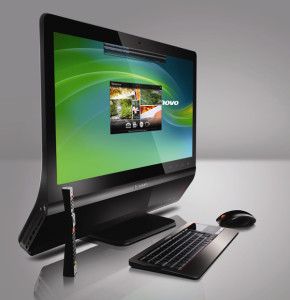 The Lenovo IdeaCentre A600 packs 4GB of DDR3 RAM and an Intel Core 2 Duo CPU (all optional and configurable of course depending on the size of your wallet). On the exterior the Lenovo IdeaCentre A600 has a 21.5 inch HD screen (1920×1080) with a 16:9 aspect ratio. You can also get a nifty remote control for it that doubles (and triples) as a mouse, VOIP handset and a game controller. With an optional Blu-ray player, GadgetHeat could grow to be quite fond of this all-in-one PC and we could even prefer it to the Eee Top all-in-one PC, the ET1602 and ET1603

With up to 1TB of hard drive space to play with, the only thing that we can see lacking is a SSD option. No doubt that would increase the $999 starting price somewhat but when you that close to a great system, paying a little extra for the stability of SSD wouldn’t be a great hardship (if you have $1000 – $1500 to spend on a PC, you may as well go for the SSD option if it’s within your budget methinks).

The Lenovo IdeaCentre A600 will make its appearance in March of 2009.