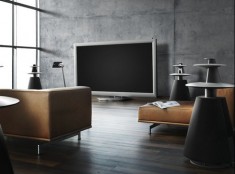 At 103-inches the Bang & Olufsen 4-103 BeoVision Plasma HDTV is not the biggest we’ve seen, but it is one of the most technologically advanced. Switch it one and watch it automatically adjust its height to your pre-set viewing level. A 10-inch speaker is also revealed by sliding out of the base. Added to that is the fact that it recalibrates itself every 120 hours or so and you have a pretty nifty machine.

The only downside to the Bang & Olufsen 4-103 BeoVision Plasma is it’s whopping $135,000+ price tag. Due for release in July, Bang & Olufsen better hop that the recession is over by then otherwise it’s going to be turning this into a air-hockey touchscreen

and try to recoup some cash….